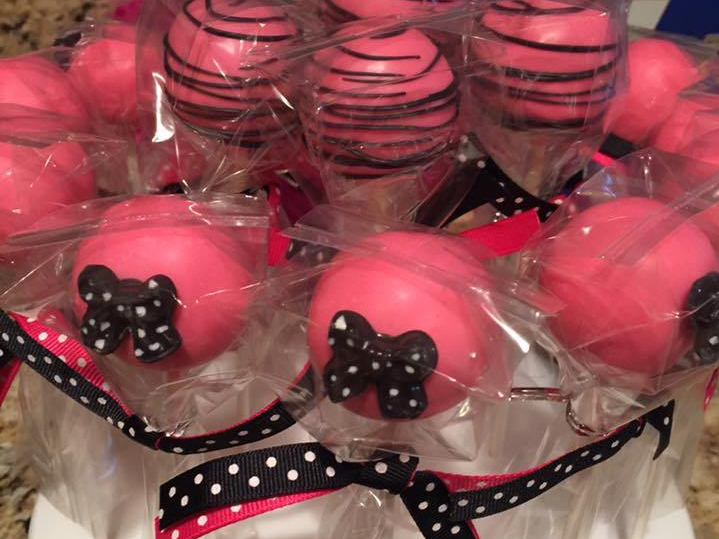 If you are like most sweet lovers out there, you just picked yourself up off the floor and are contemplating whether or not to keep reading.  I know.  How can I not love cake pops?  They are the perfect, bite-sized, melt-in-your-mouth, most wonderful, blah, blah, blah.

To make a cake pop, you take all that is good and pure about one of the most basic, standalone greats and turn it into a pile of mush.  The essence of a cake is not just its flavor, but also its structure, that textural experience that comes in every forkful.

So, while I could go on for days about all the tragedy in the world caused by the destruction of wonderful cake, I am actually going to talk to you about making cake pops.

Now you are probably just confused.

She hates cake pops, but she is going to talk about making cake pops.  Okay, crazy lady, what will you say next?

One of the common things people tell me when they know I make cake pops, and yes, I make a lot of cake pops, is that they have tried it at home and they never turn out.  They end up with a pile of mushy, sweet substance, that won’t hold a shape, and even after freezing falls right off the stick when they try to dip them in candy coating.

There is a reason. And it involves something most people don’t want to hear…

You don’t actually need to use very much icing.  Again, I know…what is wrong with this person anyway?

I know you like to have this gooey cake pop that is super sweet, but have you actually ever tried one that maybe wasn’t as sweet?  If you don’t know this, the original cake pop maker actually used cream cheese icing for that very reason, as it did not make the cake pops overly sweet.

Be that as it may, if you absolutely do not want to ever consider the idea of making cake pops that are still yummy, but just not as sweet, I suggest now is the time to move on and find something better to do with your day.  It’s okay, I won’t be offended. 🙂

Well thanks for the vote of confidence! Or just the curiosity to see if maybe there is an easier way to get cake pops to turn out right every time.

When I make cake pops, I start with cupcakes.  I buy cheap cupcake liners in bulk.  There is an added expense, but it is worth it for portion control and the ability to easily freeze extra cupcakes for later cake pop use.

When I say portion control, I mean I have the ability to decide how many cake pops I want to make, which makes it much easier when someone calls with an order for 32 cake pops and wants four different flavors.

Today, I have an order for 20 cake pops that are red velvet.  If I make a full recipe of red velvet cake, I get two 8” round pans worth of cake.  When I go to make the cake pops, I can guess that maybe one 8” cake will be enough, but I am likely to end up with too few or too many cake pops.  When I use cupcakes, depending on the cake recipe I used, I get one cake pop per one cupcake.  Some of my recipes will give me three cake pops per two cupcakes, but the one-to-one formula is much easier to work with.

I peeled the liner off 20 cupcakes and I put them in my stand mixer bowl.

The next step in the process of making pops is turning on your mixer to stir or 2.  This will break the cupcakes down to crumbs.

The next step is crucial.  Turn the mixer speed to the spot between the 2 and the 4, and walk away.  No joke.  Empty the dishwasher, load the dishwasher, check for new updates on Facebook.  This step is the step that requires patience, at least with some cake recipes.  If you have a wonderfully magical recipe like my chocolate cake recipe, you don’t have to walk far.

I started with this.

And not even a full minute later, was rewarded with this beautiful dough.

Now the red velvet is not so cooperative.  After about 5 minutes, I could see that this was not a magical cake recipe. So I did have to add icing.

As you can see from the picture, there is maybe (and it is a stretch) two tablespoons of icing in the bowl.  After adding the icing, I turned the mixer back on and spent the next several minutes staring at the dough. (I loaded the dishwasher the first time it was mixing, so I had nothing better to do.)

Finally, it got to a point where I was pretty sure it was the best “dough”-looking it would get.

So I reached in with my gloved hands and grabbed some cake.  A simple roll in my palms showed me that, yep, it was done. (Side Note: those of you making cake pops at home can use meticulously clean hands if you so choose, doing this professionally, gloves are required.) ((Side Side Note: gloves are relatively inexpensive and save you 8 trips to the sink to wash your hands while doing this…just a thought.))

I transferred it to another bowl and got out my trusty #40 scoop.  I love using a portion scoop when I make cake pops.  (So, to make that clear – I love the scoop, not cake pops.) 😉

I get consistently-sized balls of dough and my customers think I am just amazing at getting them all the same size…but I guess that secret is out there now. 🙂

I scoop out my dough and making sure to use pressure, I roll out my cake pops.

Seems pretty simple doesn’t it?  And look, 20 cake pops later and this is how much dough I had left. Seems like a good way to estimate quantity after all. 🙂

Using this method, you should not have to put the pops in the freezer in order to dip them.  Just make sure to give them time for the candy coating to set up after you put the sticks in them.  If you don’t, you may still end up with a cake pop casualty or two.

I hope this helps all you cake pop makers out there who have failed while trying to make pops. And my customers have never once complained they are not sweet enough.

So, yes, I do still hate cake pops, but as a person who likes to make my customers happy, I still make a lot of them.

Stay tuned this week for my one year update: dipping cake pops. 🙂

I wish you all much baking success!

Want to get the latest posts by e-mail? Subscribe below:

1 thought on “Confessions of a Cake Pop Hater”