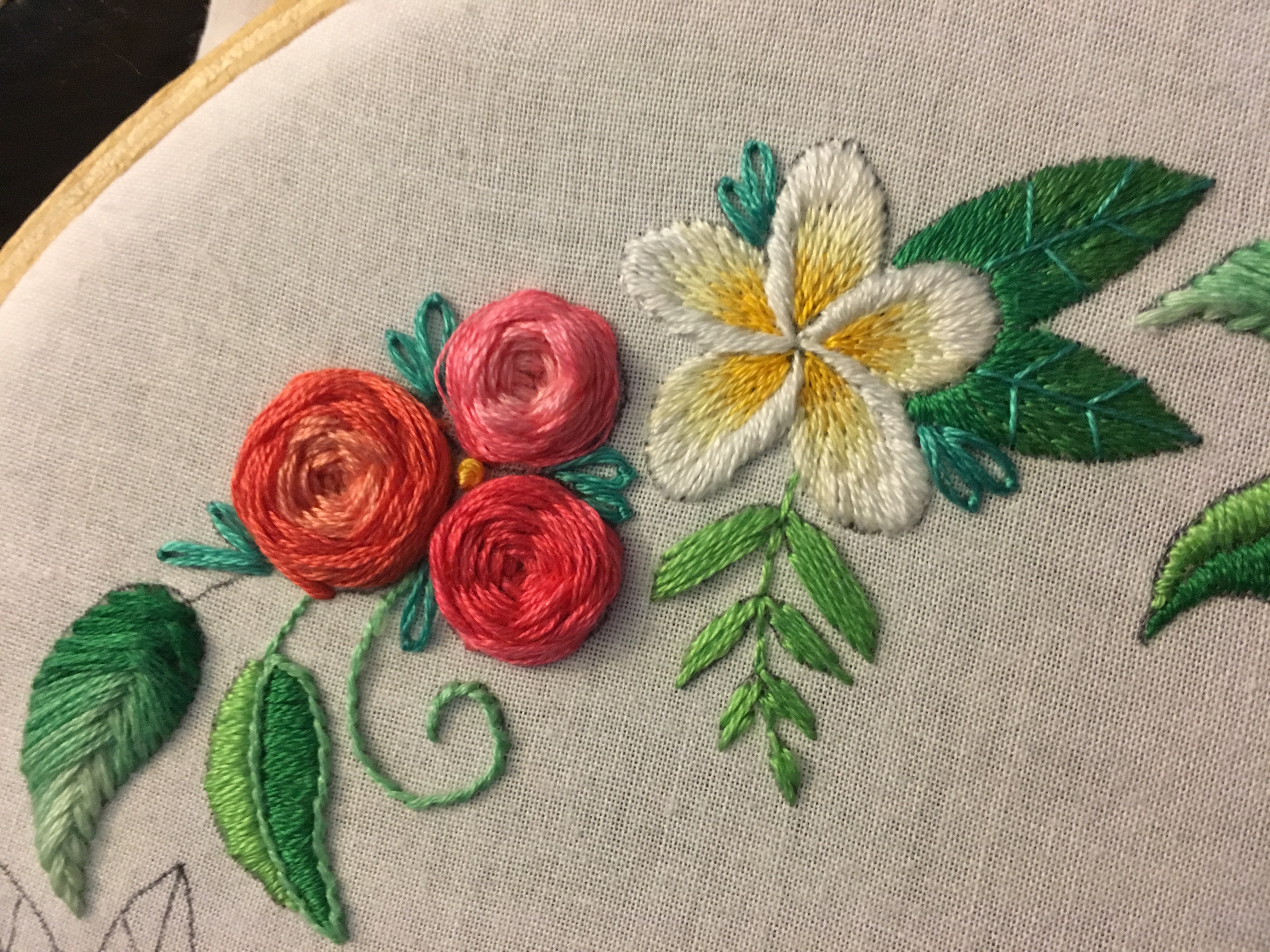 If you look at all my previous posts, you would probably disagree with me on that point. 😊

I do bake a lot though.

This time of year, I am not a fan of turning on the oven. It has been hot and humid already more this year than I would like, and it gets just miserable in our house, especially if the oven has been on. Once we reinstall the air conditioner in the kitchen window for the summer, it gets a little better, but unfortunately it is not in yet.

Of course, I always take care of client orders, I just miss out on the fun stuff, like making scones.

So, when I can’t make scones (or eat them), I have to come up with other ideas on how to spend my time.

Just over a month ago, I decided that I wanted to cross stitch again. I find it to be relaxing and a great way to not sit around and think or stress about things.

I found a cute cross stitch pattern on Etsy. Then I pulled out my box of embroidery floss.

I have been collecting embroidery floss since I was 7 or so.  I was really into friendship bracelets, and you need lots of fun colors to make them. I wrapped most of them on floss cards, but silly 7-year-old that I was, I didn’t think to note what brand or color they were. I found a few that were labeled, but none that matched the colors used in the pattern.

So, we went to the craft store (I brought the husband along for supervision), and bought some embroidery floss and cross stitch material.

A couple of weeks later, I was already planning my next project and wondering if maybe I wanted to try something new. (I still had not finished the cross stitch pattern I was working on.)

When I was doing pop-up teas, I collected a vast amount of china with pretty moss roses on all the pieces. I thought it might be fun to embroider a tea towel to match my china pattern.

Before I could work on a project for me, I had to actually learn to embroider.

Meanwhile, the St. Louis Blues were playing in the Stanley Cup Finals. During Game 7, I told my husband that I was going to make a St. Louis Blues tea towel if they won the cup.

And they did! Yay Blues!

If you have been hanging out with my blog for a while, you might notice that I get particularly excited about a few things.

My #40 scoop. (It is the perfect size for everything!)

Spreadsheets. (I use them for everything from Lego inventory comparisons, to Girl Scout cookie management, to my storage unit inventory….and many many more things.)

And learning new things. (I mention it once or twice here.)

So, in order to learn to embroider, I went on Bluprint and found beginner classes in hand embroidery. (I am not receiving affiliate income from links in this post.)

One class in particular was fun, as the sampler was an actual design, not just strips of each technique lined up side by side.

I focused on the techniques that would be useful while making my tea towel first, and practiced those repeatedly.

I then dived right into the towel.

I started with satin stitch for the Blue Note.

Then moved on to outlines.

It took a while to figure out how to fill the letters, as nothing looked right to me.

While I was trying to decide what to do, I went back to my Bluprint class and finished one section of the sampler. I also spent a lot of time drawing, designing, and figuring out how to build a Lego gingerbread house… a story for another time perhaps.

Once I outlined my words, my towel was complete.

Of course, while that project was under way, I kept trying to think of other things I could embroider. So, I alternated back and forth between the towel and playing with some vintage fabric I was given recently.

This is what came out of that.

In my occasional free time, I make and sell crafts on Etsy. Check out my shop if you would like to see some of my other crafts on this site, as well as my Etsy shop.

I am excited to post this art and see what happens. 😊

Now that the only non-baking project I am working on is the Lego house, maybe I will actually start on the tea towel with the moss rose pattern.

Who knows what other ideas might come my way first though!