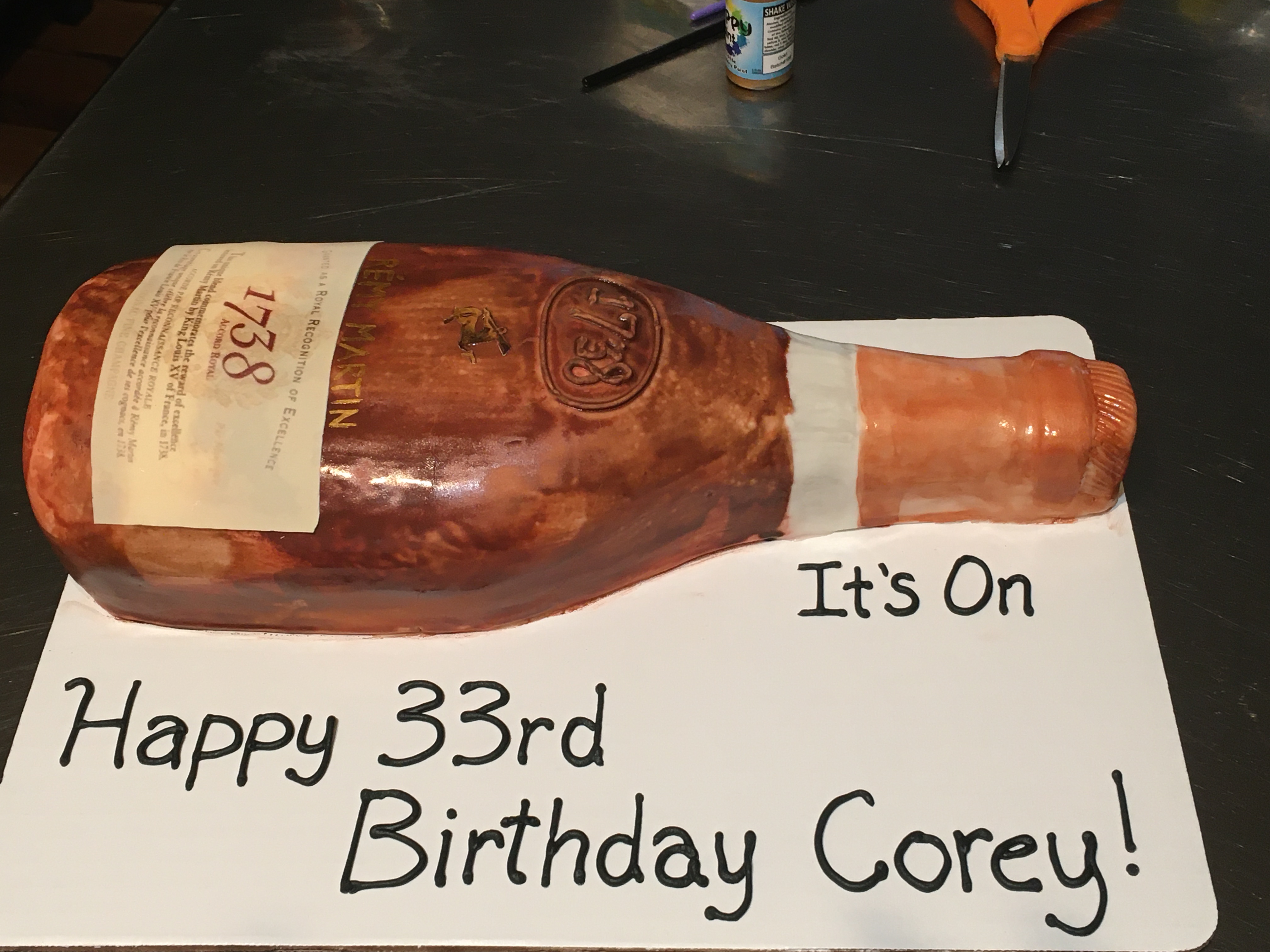 Over the last couple of months, I have had a very hard time being inspired to write. For me, not much has changed. I am baking just as much I was before, I guess I just haven’t gotten excited about anything lately.

I am trying to get back on track though.

In order to make a champagne bottle cake, the key is having a good, cold, dense cake to work with. Fluffy moist cakes do not carve well. Luckily, my vanilla cake recipe does seem to work well (most of the time).

To start this cake, I baked my cake in a sheet pan. Then I printed out the image I was working with exactly the size I wanted the finished cake to be.

Then, working in sections of the bottle, I cut rectangles of cake to size, so I could start carving.

When I was happy with the shape of the bottom layer, I crumb coated the layer, to trap crumbs and to give the next layer something to stick to. I sliced cake sections at an angle, then arranged them on top of my first layer.

It was tricky to get the layers crumb coated, but definitely necessary to start creating the final shape for my cake.

I put the cake back in the refrigerator and let the crumb coat firm up before adding my final coat of icing. I tried hard to get the final coat as smooth as possible for the fondant, but I definitely need more practice. 🙂

Using the printed image of the bottle, I rolled out my fondant to the correct size while the final coat of icing was firming in the refrigerator.

I gently transferred the fondant onto the cake, and carefully started smoothing with gloved hands coated in powdered sugar.

When I was happy with the fondant’s smoothness, I trimmed off the excess, tucking the bottom edge under slightly.

While the fondant was still soft, I worked on adding detail to the cap of the bottle.

Using royal icing, I carefully piped the detail onto the body of the bottle. I then let it all sit at room temperature so the fondant could start to set and the royal icing could dry.

A few hours later, the royal icing was dry enough to begin painting the body of the bottle.

It took several coats and several colors to achieve a look that was close to the color of the alcohol.

To finish up, I added the wording on the cake board and placed an edible image of the label on the cake.

When the cake was dry, I painted on the last details with gold.

As with any cake, what seems daunting at first is achievable if you just take it one step at a time. 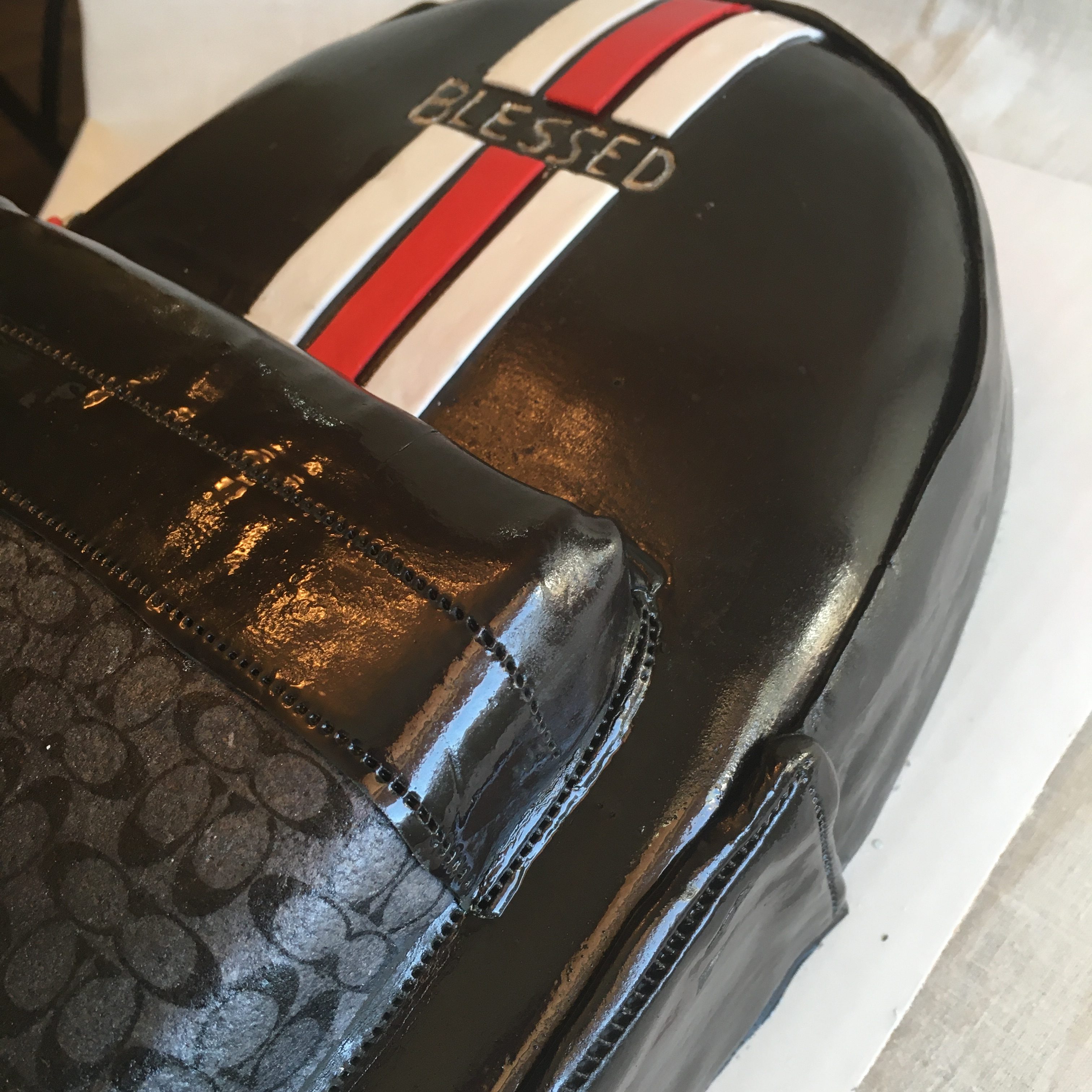 I am terrified of sculpted cakes. Typically, when someone wants something sculpted, I either turn down the job, or find that the customer didn’t realize the cost involved in that kind of cake. Either way, for the most part, I have gotten away with only doing a few with only minor carving work.

So when the opportunity to make a backpack cake came up, I was hesitant, but thought it sounded like an interesting project to take on. I had a lot of fun making it, but I have no desire to make one of those crazy standing up purse cakes.

This cake is pretty small, as it only needed to serve about 15 people. So of course, I baked an 11″ x 15″ cake to make sure I had more than enough to work with.

I drew my templates and cut them out of plain white paper, then used them to cut the cake into the sizes I wanted for the backpack and the pocket.

My original pocket was too big, so I cut down the piece a bit. I also cut some of the height off of the pocket.

I decided on an American buttercream for this project. I wanted something a little less sweet than my decorator icing under the fondant.

And then this happened…

Yep, I somehow managed to put enough pressure on the metal rod in my rolling pin to actually snap it in half! (arm flex)

I think I have been working on doing it for awhile, but it was still completely crazy to actually break a piece of metal only used for rolling fondant and cookie dough.

Trust me on this one, you never want to actually pull an angie, especially the key one. They are really hard to get out of the lock once you do this. Really. Hard.

I managed to get the fondant rolled out with only one handle and set it aside.

Once the crumb coat was firm, I added my final coat of icing and let that chill as well.

Once it was fully chilled, I draped my fondant over the cake and started smoothing.

After that, I added my little loop at the top of the cake.

In order to provide a sticky surface for the wafer paper “fabric” I printed, I used a combination of corn syrup and vodka. I then sprayed my “fabric” with wafer paper conditioner and carefully placed it on my cake.

I decided I wanted the cake to have a shiny, patent leather finish, so I painted the rest of the cake with the vodka/corn syrup mixture as well.

Before I added the top flap of the pocket, I added my stripes and “brand” to the cake. I used a fondant tool to add stitches to the cake edge.

Strips of fondant were added around the sides and “stitched” to give the cake a more backpack type feel.

I added the flap of my pocket with some stitching, and made the zipper detail.

Once the remaining details were painted with vodka and corn syrup, I added a little silver to the “brand” on the bag, and it was finished!

This cake turned out to be much simpler than I originally thought it would be. I might even think about making another one someday. 😉

Don’t worry, I bought a new rolling pin, and it is marble and extremely heavy. 😉 Hopefully, I can keep it for a few years before I break it too.